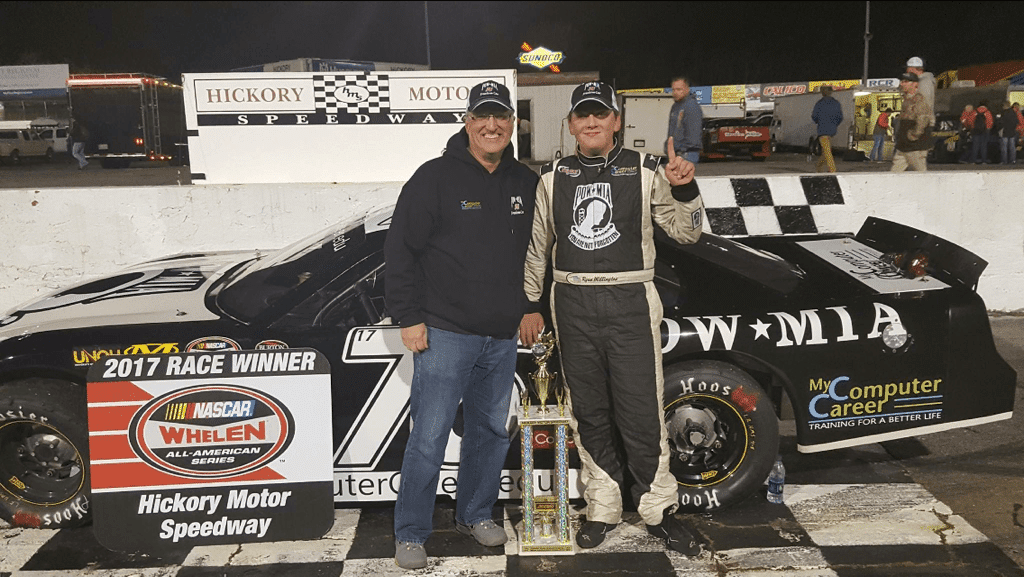 “This was another great night for Millington Motorsports, MyComputerCareer, POW-MIA and Team Johnson Motorsports,” The happy driver said.  “After the motor problem, we had in morning practice this morning we weren’t sure we were even going to be able to race tonight, so a win and a second is definitely sweet.  Our team was able to fix the motor and get me right back in the winner’s circle and I can’t thank them enough for that.”

Of his second place fun in the nightcap, Millington didn’t mince words.  “It’s tough coming from the back even in a short field in a 40-lap race.  There may not be a ton of cars here, but the cars that are here are tough to pass. When you have to spend a few laps passing everyone, the leader just checks out and it’s hard to keep tires under your car long enough to get to him with no yellow flags. Charlie (Watson) was fast as always and I just didn’t have enough left to get to him at the end.”

Ryan appeared as a guest on the web-based Race Face TV Show this past week on MNOTV.com.  The show, based out of Florida, highlights future talent across the sport as part of its mission.  Fans can see the podcast show by going to //www.mnotv.com/raceface/on-demand/ .

The team will now focus their efforts on preparing the newly acquired Team Johnson Motorsports super late model for a run at the April 15th Pro All Star Series (PASS) South Tour’s Easter Bunny 150 at Hickory.

That race will be Ryan’s first PASS South super late model start, and he says the team wants to be prepared to put their best foot forward.

“As a driver, you want to keep racing every week when you’re on a roll and having so much fun.  But we want to make sure we spend time testing the new car for the PASS South race because we want to race for the win if we can. This is a new step for me and for us as a team. We’ll focus on that race and then see what the rest of the season has in store for us.”

To follow Team Johnson Motorsports and their drivers visit us at www.FreedomCar.org.

Ryan Millington is an accomplished 15-year-old racer from Statesville, North Carolina.  Growing up in a family with a background and love for the sport, Ryan has already been a winner on both dirt and pavement, competing in several different types of cars. For 2016 found Ryan and the team concentrating on building their late model program out of their shop in Statesville, N.C. They won three times and finished second in points at Hickory Motor Speedway, and have been named NASCAR’s North Carolina State Rookie of the Year for the NASCAR Whelen All-American Series in 2016. For 2017, Ryan and Millington Motorsports have partnered with Team Johnson Motorsports and their supporters, MyComputerCareer and POW-MIA, and Ryan’s number will change from 17 to 76 as he converts to the identical “Freedom Car” look that Team Johnson has become known for.