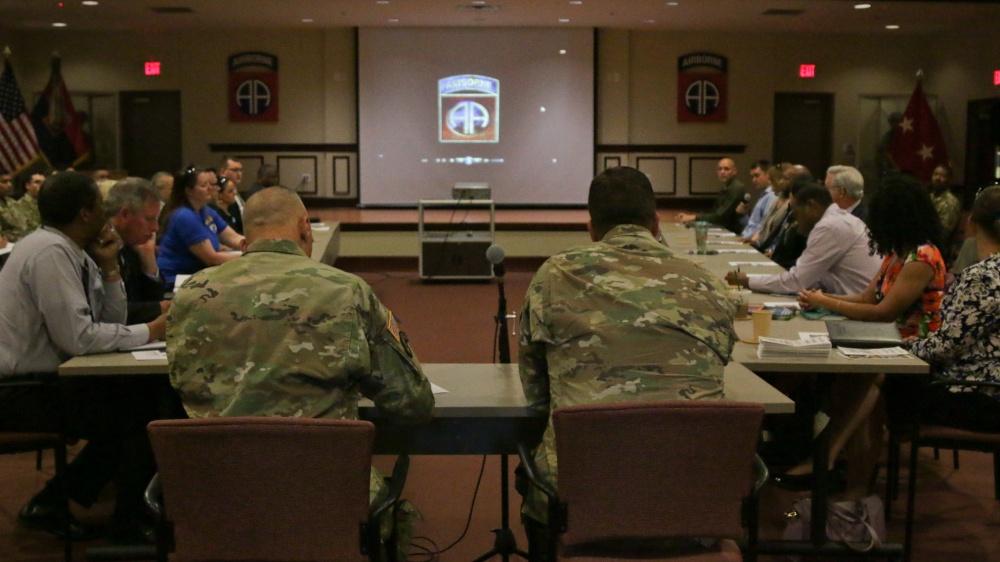 Click HERE to read the original article that is located in ‘The Fayetteville Observer’.

The 82nd Airborne Division wants to keep as many of its paratroopers as possible.  But when it’s time for a Soldier to hang up his beret, the division also wants the Soldier to find success in the civilian world.  “At some point, we all leave,” said Maj. Gen. Erik Kurilla, commanding general of the 82nd Airborne Division. “What we want to do is have a soft transition.”  To that end, information technology leaders from across North Carolina met with 82nd Airborne leaders on Tuesday to discuss how paratroopers can best transition from the Army to IT careers.  At the same time, Kurilla and Command Sgt. Maj. Michael Ferrusi said their aim was to educate industry leaders on what skills paratroopers can bring to their organizations.  More than a dozen businesses and schools participated in the Paratroopers For Life forum at the division’s Hall of Heroes. They included Cary-based SAS, IBM, Innovative Systems Group, Siemens Healthcare, Embry Riddle, Fayetteville Technical Community College, North Carolina State University and the Army Research Office, among others.  It was the fourth such forum hosted by the 82nd Airborne Division, with previous events focused on law enforcement, fire and emergency services and the transportation industries.

The free-flowing discussion touched on what soldiers can do while still in uniform to better their chances for employment.  Most of the suggestions were aimed not only at the division’s signalers, but also other troops interested in careers in IT who might qualify for training and apprenticeship programs.

Officials said there are not enough IT professionals to fill every job in the industry. And the need is ever-growing, with an estimated 1.5 million cybersecurity jobs going unfilled by 2020.  Veterans have a unique ability to fill those jobs, said Grant Gibson, a former Marine who now works for MyComputerCareer, but many don’t know how to market their military skills for the business world.  Kurilla said the 82nd Airborne Division has more than 130 military occupational specialties, or military career fields, among its 18,000-plus soldiers. And every one of those soldiers have skills that go far beyond “shooting things.”

Every paratrooper in the division has some level of leadership skills, he said. They are trained to operate in small groups, make decentralized decisions and exercise initiative and sound judgment in difficult situations without supervision.  Those are skills businesses want, Gibson said. Others agreed.

Many of the businesses and schools have existing relationships with the Army, often through Fort Bragg’s Soldier For Life – Transition Assistance Program, which helps service members at the nation’s largest military installation transition to civilian careers.  Kurilla said that it’s important that leaders do what they can to ease the transition of soldiers because they may later serve as informal recruiters for the unit.

“They’ll always be connected to the 82nd Airborne Division,” the general said. “I want them to be an ambassador.”  The Paratroopers For Life forums were created in late 2016. And officials said the division eventually hopes to host a career fair for transitioning troops.  In the past, Fort Bragg officials have said about 8,000 soldiers transition from the Army from the post each year. Thousands of them are former 82nd Airborne Division paratroopers.  On average, those soldiers are 26 years old, have at least one combat tour and some college education, officials said. They are also veterans of numerous military training courses and schools.

Want to see more MyComputerCareer testimonials and reviews? Or are you looking for IT certifications like Comptia A+, CompTIA Net+, CompTIA Server+, CompTIA Server+, CCNA, CCENT, Microsoft Certified Professional (MCP), CEH (Certified Ethical Hacker) and others? Come on over and check us out!